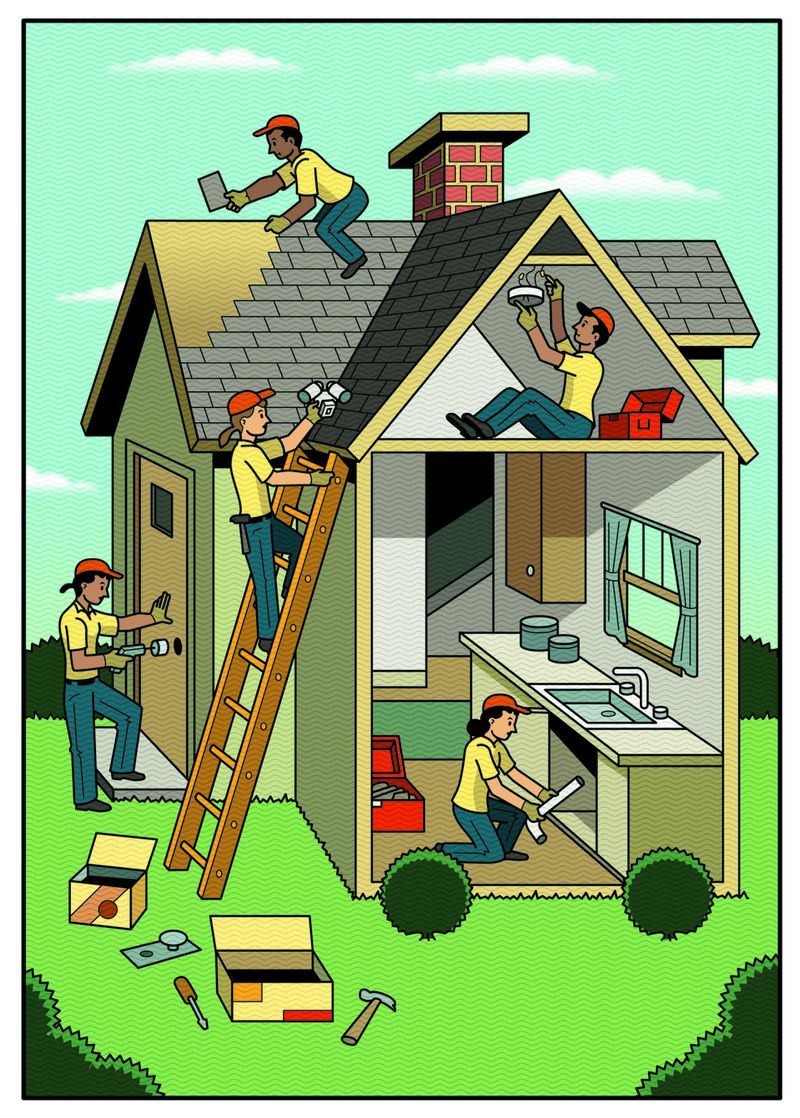 Peter and Maria HoeyThis story originally appeared in the Winter 2021 Issue of This Old House Magazine. Click here to learn how to subscribe.

An older house can be expensive to insure. If you want to be able to replace distinctive building materials and architectural features in the event of a loss, you may need to increase your policy limits for the structure or add optional coverages.

“There definitely are concerns for older homes that often lead to higher costs,” says Karen Collins, assistant vice president of personal lines at the American Property Casualty Insurance Association, a trade group. “Being able to access the materials or the craftsmanship needed to re-create your home can drive up costs.”

That’s not the only challenge to finding affordable insurance. Even if your home is just 30 or 40 years old, an outdated roof, plumbing, or electrical system can raise the cost of insurance, or even make qualifying for a policy difficult.

Simple Upgrades That Will Save You Money on Home Insurance

Making upgrades that leave your home safer from accidents, break-ins, and natural disasters can help.

If you haven’t owned your house for long, you may not know what problems the previous owners experienced—but your insurer does, and a spotty history could translate to a higher premium. Insurers look for problems that could be recurring, like burst pipes, kitchen fires, or break-ins in a high-crime area.

You can see what insurance claims have been filed in the past by requesting a free copy of your Comprehensive Loss Underwriting Exchange (CLUE) report (order one at consumer.risk.lexisnexis.com). Treat that as a guide to what you may need to get fixed. “When insurers see that the house has had losses, they will ask if repairs have been made that would prevent similar ones in the future,” says the Insurance Information Institute’s Janet Ruiz.

Beef Up Safety and Security

Upgrades that will alert you to safety problems quickly can earn you a discount on your homeowners policy. For protection against break-ins, that can mean cameras and an alarm system, especially if it’s connected to local authorities. A home security system may qualify you for a discount of up to 5 percent on your premiums, says Ruiz.

Insurers like to see hardwired smoke detectors throughout and a fire extinguisher in the kitchen. A sprinkler system can also earn you a better rate.

Old pipes and valves in your home raise the risk of leaks and water damage. “People underestimate how frequently water damage occurs and how significant it can be,” says Sarah Jacobs, vice president of personal lines product development at Nationwide. Nearly a third of home insurance claims are from water damage, Jacobs adds, with the average running around $10,000.

Many insurers will offer a discount for installing water-leak detectors near the kitchen sink, washing machine, water heater, and other flood-prone spots—even as much as 10 percent. By alerting you to a minor drip early, these monitors can limit the damage; some even shut off the water. As smart home technology becomes more widespread, some insurers are also starting to offer discounts for monitoring systems that connect to an app on your phone.

“Once a home hits forty years,” says Ruiz, “the plumbing, electrical, and foundation are considered old because of changes in building codes and upgrades in materials.” An older home might have corroded valves and leaky pipes, or outdated wiring. If you can show your insurer that you’ve made upgrades, you could save as much as 5 percent on your premium. In rare instances, old wiring might make your home uninsurable—say, if a high percentage is knob-and-tube or aluminum.

The average life span for a roof will depend on the material and the weather in your area, and can be as little as 20 years (for asphalt shingles) and as long as 50 (for slate and tile). “Newer roofs can earn discounts with most carriers, often those no more than ten years old, especially in states prone to hailstorms or high winds,” says Collins.

Another problem with an old roof is that if it’s damaged in a disaster, your insurance may not cover the full tab to replace it. “Insurers are really penalizing people with roofs older than ten years,” says Amy Bach, executive director, United Policyholders, a consumer advocacy organization based in San Francisco. Policies often pay the depreciated cash value of a roof, not the replacement value, leaving you on the hook for much of that cost, Bach says. The same goes if you have to replace old electrical and plumbing systems—so make sure your policy will pay to install a system that’s up to today’s standards.

In areas of the country prone to natural disasters, such as hurricanes, earthquakes, or wildfires, certain home improvements may lower the price of insurance. “Mitigation that helps reduce your risk of loss or the extent of damage may earn a discount,” says Collins. In high-risk areas, some insurers might require certain mitigation to allow you to qualify for a policy in the first place.

In hurricane regions, your roof is key, and in addition to having a newer one insurers may want to see it tied down. In areas where earthquakes are common, your foundation is important, and may need to be retrofitted with braces and bolts, says Ruiz. (California residents may qualify for state funding to help cover the cost.) You also might earn a discount for adding a seismic shutoff valve on your gas line.

The recent rash of wildfires in western states is upending the insurance market there. “People are getting dropped in fire-prone areas,” says Bach. “It doesn’t matter what you’ve done, it’s where you are.”

Taking steps to harden your home against a wildfire probably won’t mean a better price, but it may be the only way to get a policy. That means building with a fire-resistant roof and deck materials, landscaping safe zones near the house and adding water storage tanks, mesh over vents to keep out embers, and dual-pane heat-resistant windows.

“We’re frustrated that insurers are not rewarding people for wildfire risk reduction,” says Bach. “But we are putting pressure on them to take risk-reduction measures into account, and the tide is turning.”

Did you miss our previous article…
https://www.healthyhomewisconsin.com/?p=2029