How to Unclog Any Drain 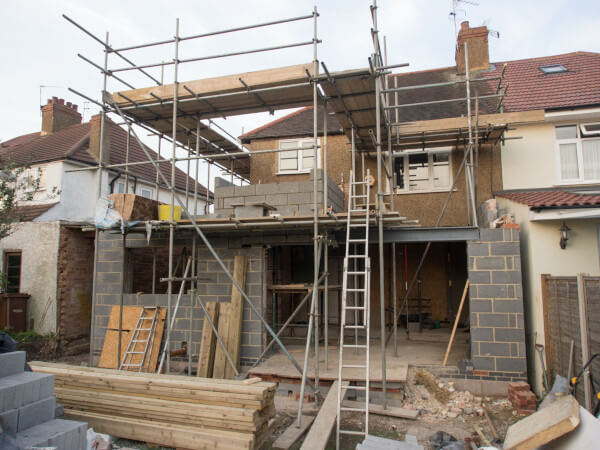 Armed with the right tools and techniques, you can easily unplug stopped-up drains without having to call in a pro.

All plumbing systems develop clogs—there’s no way to avoid it. We’ll show you how to clear stubborn clogs in a kitchen sink, bathtub, toilet and floor drain.

These proven techniques will dislodge virtually any clog. If you can’t clear a clog after a few attempts, make sure you admit defeat and turn the job over to a drain-cleaning service or licensed plumber. Exerting too much force can permanently damage a pipe or fixture.

That said, specialized plumbing tools used to combat clogs are affordable, and they’re available at any hardware store or home center; you can even rent some.

The first tool to reach for when trouble arises is a plunger. This plumber’s friend clears clogs from most fixtures, including sinks, tubs and toilets. Every homeowner should keep one handy.To dislodge clogs located farther down the drainpipe, use a cable auger, or plumber’s snake, a long, flexible steel cable wound around a spool that’s fitted with a hand crank. Cable augers are available in lengths up to 100 feet, though a 25-foot model will suffice for most any household clog.A closet auger is specifically made for snaking out toilets. It, too, is equipped with a hand crank, but instead of a spool, the cable is encased in a rigid shaft. The auger end is bent at a precise angle to fit through the tight curves of a toilet trap.For a very large clog or one that’s far from the fixture, rent an electric power auger. This machine—basically a large cable auger powered by an electric motor—is very effective at cutting through virtually any clog, even tangled tree roots. Before bringing home a power auger, be sure the rental agent shows you how to safely dispense and retrieve the cable.

How to Unclog a Sink

Photo by Merle HenkeniusMost minor sink clogs can be cleared with a plunger.

Partially fill the sink with water, then start plunging. Vigorously work the plunger up and down several times before quickly pulling it off the drain opening. If it’s a double-bowl kitchen sink, stuff a wet rag into one drain opening while you plunge the other one. If it’s a bath sink, stuff the rag into the overflow hole. In both cases, the rag helps deliver the pressure directly to the clog. If plunging doesn’t work, grab the cable auger and go to work under the sink. Remove the sink trap with a pipe wrench. The large, threaded coupling on PVC plastic traps can often be unscrewed by hand. Empty the water from the trap into a bucket, then make sure the trap isn’t clogged.

Cut Through the Clog 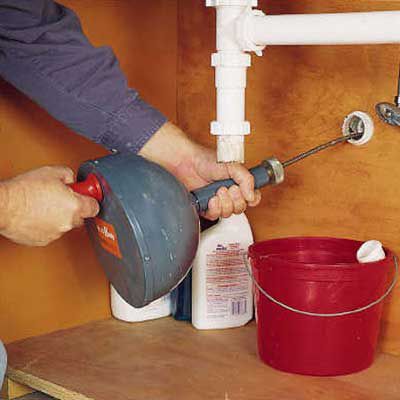 Photo by Merle HenkeniusRemove the horizontal trap arm that protrudes from the stubout in the wall. Feed the cable into the stubout until you feel resistance. Pull out 18 inches of cable, then tighten the lock screw. Crank the handle in a clockwise direction and push forward at the same time to drive the cable farther into the pipe .Pull out another 18 inches of cable and repeat the process until you break through the blockage. If the cable bogs down or catches on something, turn the crank counterclockwise and pull back on the auger. Once the cable is clear, crank and push forward again. Retrieve the cable and replace the trap arm and trap. Turn on the hot-water faucet to see if the sink drains properly. If it doesn’t, don’t worry. Debris from the busted-up clog sometimes settles into a loose blockage. Partially fill the sink with hot water and use the plunger to clear the debris. Follow up with more hot water.

How to Snake a Tub Drain 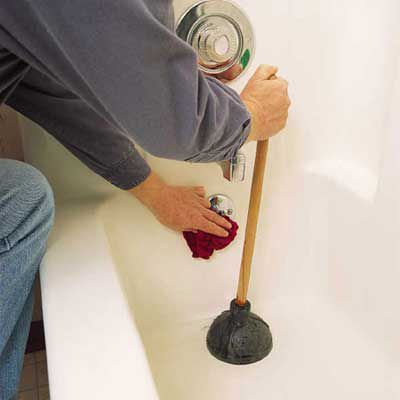 Photo by Merle HenkeniusIt’s rare for a bathtub to suddenly become stopped up. A clog in the tub usually builds up over a period of several weeks, with the tub draining more and more slowly each day. We’ve all seen this happen.

As with a sink clog, start with the plunger.

First, unscrew the screen from the tub drain and use a bent wire to fish out any hair and soap scum. If there’s a pop-up drain on the tub, raise the lever to the open position, then grab the stopper and pull it from the drain hole. Clean it of all hair and soap. This will often take care of things. If not, cover the holes on the underside of the overflow plate with a wet rag and start plunging. If that doesn’t clear the clog, use the cable auger. 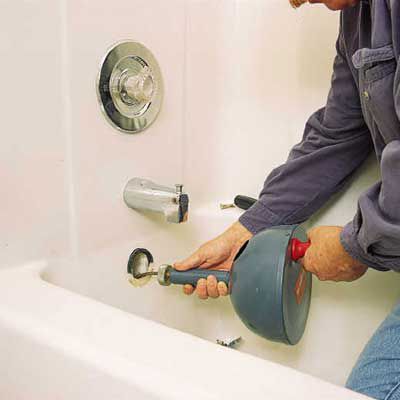 Photo by Merle HenkeniusRemove the overflow plate from the end of the tub; the stopper linkage will come out with it. Feed about 30 inches of cable down the overflow tube. Push forward while turning the hand crank. You’ll feel resistance almost immediately, but keep cranking on the auger until the cable passes all the way through the P-trap that lies underneath the tub. Retrieve the cable, then run several gallons of hot water down the drain. Finally, replace the overflow plate and screen or pop-up drain.

How to Unclog a Toilet

Use a Closet Auger 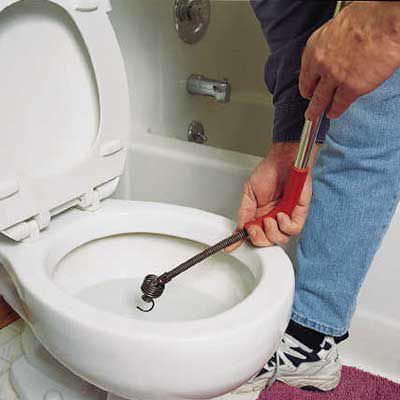 Photo by Merle HenkeniusToilet clogs almost always occur at the top of the tight, up-curving trap that’s part of the fixture. In some cases, a plunger can provide enough power to clear the way, but more often than not, you’ll have to use a closet auger.

Place the auger end into the bowl with its bent tip aiming up. 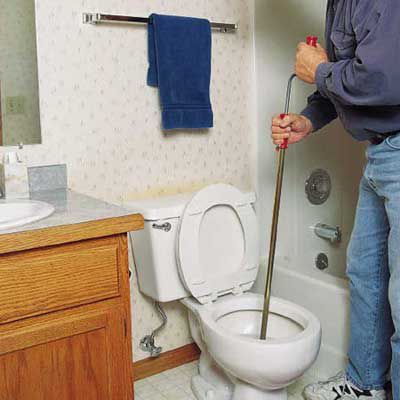 Photo by Merle HenkeniusHold the tool shaft steady as you crank and push down on the handle. You’ll feel the cable snake its way up and through the trap. Continue cranking until you’ve dispensed the entire cable—about 3 feet. Retrieve the cable by simultaneously cranking and pulling up. Flush the toilet to clear out the drainpipe. If it’s still a little sluggish, run the auger through the trap twice more: once up the left side of the trap, then again up the right side. This three-pronged attack will clear any matter clinging to the sides of the trap.

How to Clear a Floor Drain 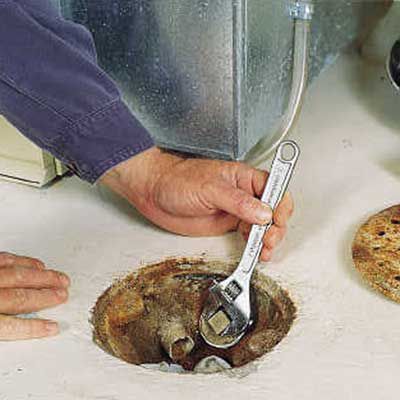 Photo by Merle HenkeniusIn many basements, garages and laundry rooms there are floor drains that carry away wastewater from central air conditioners, washing machines, water heaters and snow-covered cars.

Over time, these drains collect large quantities of soap scum, laundry lint, sand and slimy bacteria that crystallize inside the long drainpipe. To break through these tough blockages, you’ll need the extra clog-clearing muscle of an electric power auger.

Rent a power auger with at least 50 feet of cable. Start by removing the strainer that covers the drain hole. Then, look for a clean-out plug on the side of the drain basin. Remove the plug with a wrench. That allows you to bypass the trap and feed the cable directly down the pipe.If the drain doesn’t have a clean-out plug, you’ll have to snake the cable through the trap; this is a somewhat more difficult approach. 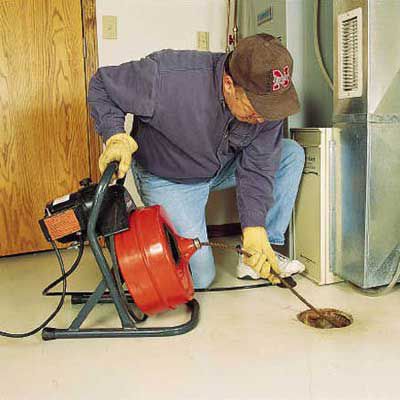 Photo by Merle HenkeniusPlug in the power auger and position it near the drain. Most models are fitted with a foot-pedal switch, leaving both of your hands free to guide the cable. Feed several feet of cable down the drainpipe. Set the motor for clockwise rotation, then step on the switch to start the cable turning. Push the cable into the pipe until you feel resistance or hear the motor start to bog down.Stop the motor, reverse the rotation and back out a few feet of cable. Switch back to clockwise rotation and feed the cable farther down the pipe. Repeat this back-and-forth procedure until the clog has been cleared away.Retrieve the cable and flush out the drainpipe by pouring several buckets of hot water down it. If the water still drains sluggishly, run about 2 feet of cable directly down the trap.Before replacing the clean-out plug, wrap Teflon tape around its threads; this will make it easier to unscrew the plug in the future. Caution: Failure to replace the clean-out plug will allow dangerous sewer gases to seep into the house.

Did you miss our previous article…
https://www.healthyhomewisconsin.com/?p=2004