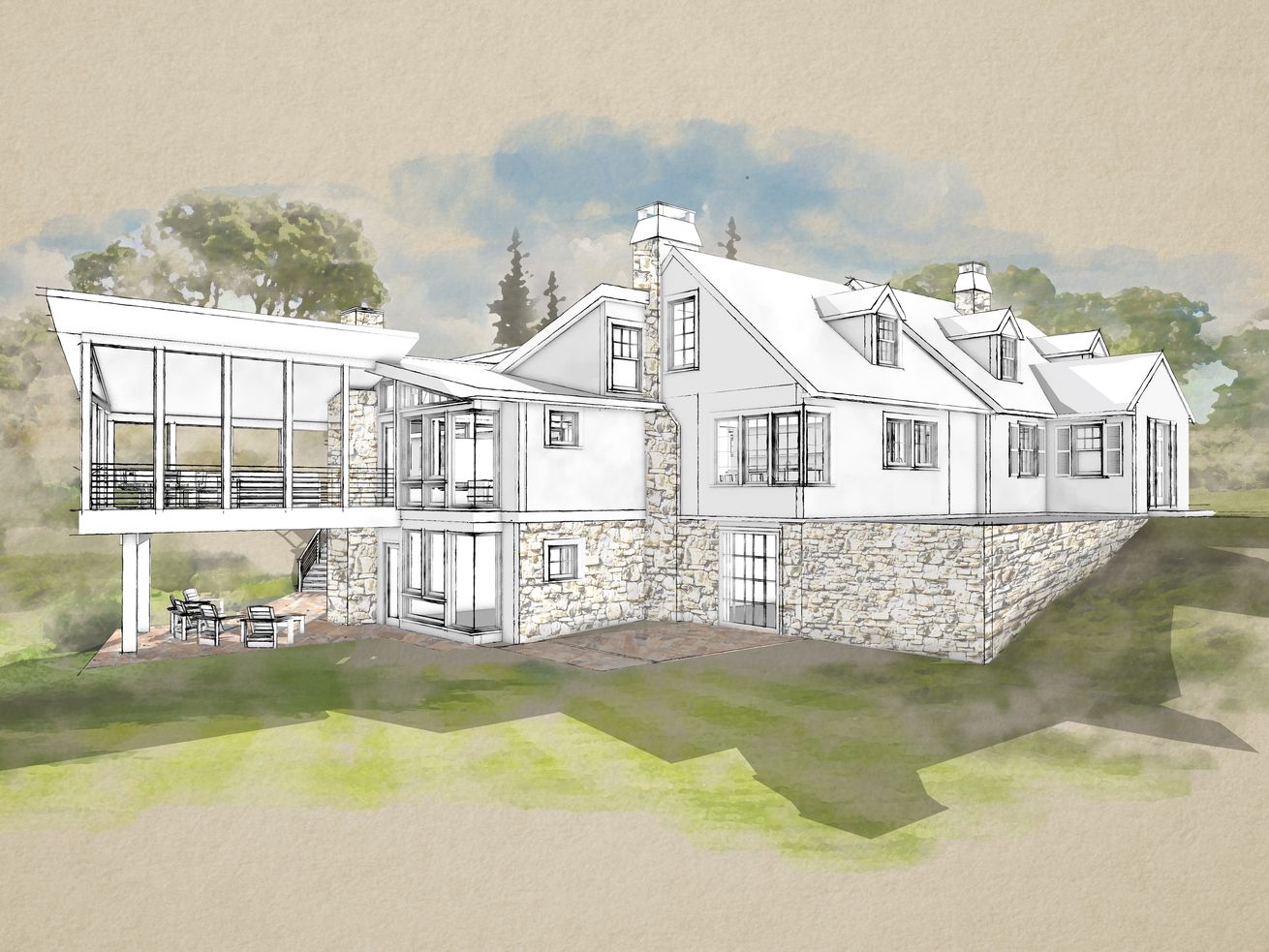 Shown: Architect Andrew Sidford’s design for the renovated house marries the 1880s Cape with a modern extension that features high ceilings and walls of windows. New spaces will deliver more light, air, and access to the natural attractions in the back of the property.

Every time Megan and I come here, we’re reminded that this is definitely where we want to raise our family,” says Lincoln Pasquina of the 1880s Cape Cod–style house in Concord, MA. One reason is the land: three sloping acres with a meadow and woods, bordering a horse farm with a pond. Another is the house itself, an antique Cape that reminds Lincoln of his childhood on Boston’s North Shore, and marks a return for his wife, Megan, to the town where she grew up. 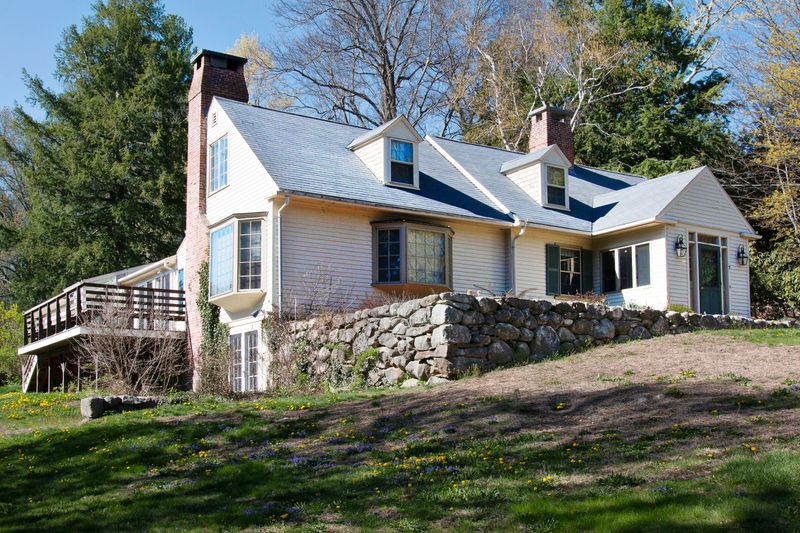 Meg ReinhardtShown: Sited on three acres of meadow and woodland, the Cape has stood the test of time. But the dated interior is cramped for a growing family.

But the house comes with some drawbacks, too, notably a dark, low-ceilinged first floor, an awkwardly chopped-up second floor, and a nondescript 1960s garage addition. With a 2-year-old son at home and plans to grow their family, Megan and Lincoln are looking to add more space—in part because they are committed to a work-from-home lifestyle. To expand the existing house while honoring its history, they enlisted local architect Andrew Sidford to draft plans for a renovation, which will be documented as part of TOH ’s 43rd television season. 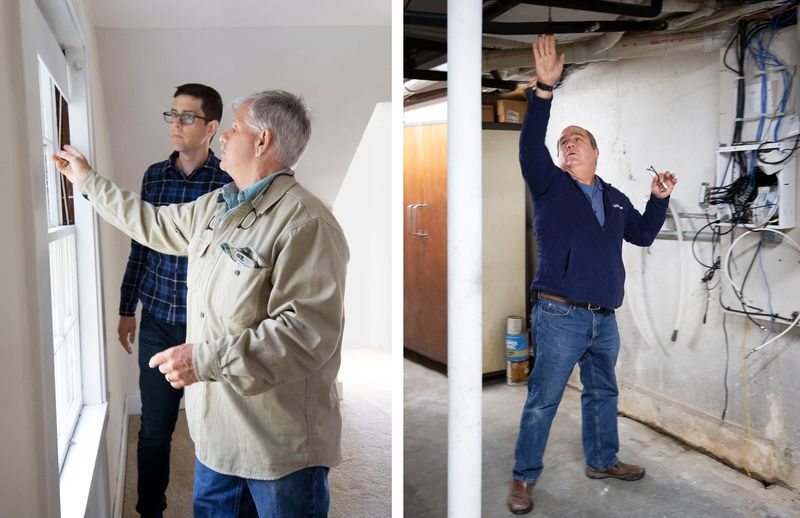 Meg ReinhardtShown left:TOH general contractor Tom Silva and Lincoln Pasquina look over the existing double-hung windows, with their sash cords and counterweights, in the 1880s house.

Shown right: Richard Trethewey traces the pathways of heating pipes as he analyzes the zoning in the old portion of the house.

Sidford’s design includes a dramatic departure from the Cape’s traditional architecture: a modern addition, with high shed roofs and lots of glass, that offers needed extra room and broad views of the private back part of the property. “I’ve always loved modern additions on historical houses­—the juxtaposition, if done right, can be so beautiful,” Megan says. “Also, while we love the coziness of the existing house, it’s very important to us to have some living space with tall ceilings and lots of light and air.” 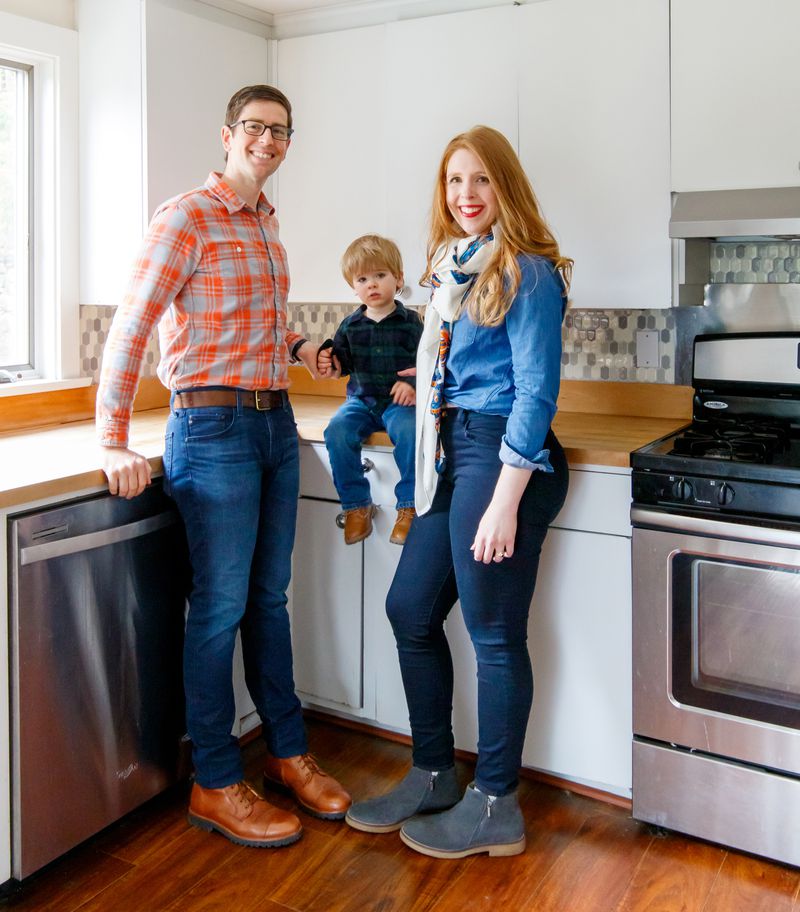 Meg ReinhardtShown: Lincoln and Megan Pasquina with their son in the Cape’s current kitchen.

Megan and Lincoln sought out Sidford after seeing some projects of his that infused modern architecture and design into old houses. For the Pasquinas’ project, “we pushed the idea of a modern addition with floor-to-ceiling glass, cathedral ceilings, and shed rooflines,” Sidford says. “They gravitated toward the more modern roof forms.”

For TOH host Kevin O’Connor, the transition from traditional to modern makes the project especially interesting. “It’s a classic house, but the stuff the previous owners did is pretty expected,” he says. When the Pasquinas began looking to add on in 2021, he agreed that it was “perfectly fine to think about doing it in a modern way.”

Lincoln is excited about the expansive views the new addition will afford. “I think that would be awkward to try to replicate in a Cape,” he says. “The screened porch is cantilevered out into the yard­—that look of floating space wouldn’t feel consistent with a pure Cape, so the transition to modern there makes it feel more cohesive.”

Michael SvirskyShown: The modernized house will present a whole new appearance from the back, with shed roofs topping a family room and a screened porch overlooking the property.

Meg ReinhardtShown: Save for a deck, the existing house offers scant views of the backyard.

Besides the modern addition, the plan is to save and reconfigure the original 19th-century portion of the house, tear off the single-story 1960s garage extension that holds a sunroom and dining room, and create an owners’ suite over a new two-car garage, on roughly the same footprint. Megan and Lincoln will each get a home office: hers off the back of the garage, his carved out of the existing downstairs. Upstairs under the Cape roof, three bedrooms and a small bath will be reconfigured into two slightly larger bedrooms and two baths. The existing living room will become the kitchen, reoriented toward the new addition and the backyard, taking advantage of the morning sunlight. The modern living room addition with screened porch will be separated from the main body of the house, allowing it to have sunlight all day and 180-degree views of the expansive yard and pond.

“As architects, our intention is always to see if we can add a new chapter, without obscuring the original house.” —Andrew Sidford, ArchitectThe project will present some new wrinkles for TOH home builder Charlie Silva’s crew. Grafting the modern shed-roofed addition onto the traditional Cape calls for new carrying beams to support the roof where it intersects the old house. Where the addition cantilevers over the yard, another shed roof pitches in the opposite direction. But Charlie is taking the complex roof work in stride: “It comes down to the engineer giving us the plan for where we have to put structural beams to carry the roof loads. But it’s not your typical gable roof system, for sure.”

Michael SvirskyShown: The existing garage will be replaced with an owners’ suite atop a new two-car garage, joined to the old house by a hallway connector.

Meg ReinhardtShown: A 1960s-era garage addition will be coming off.

At 1,515 square feet, an extensive finished basement under the addition will include space for a home gym and a family room. To connect this new space with the finished basement under the original Cape (and its full bath) will require breaking through the existing concrete wall. “The new basement floor will be lower than the existing basement’s, so that we can have higher ceiling height,” says Charlie. He plans to use a wet saw to cut a new opening, dropping the chunk of concrete into the new excavation and hauling it out with a chain and the excavator. Then the crew will reinforce the existing footings. “There’s a very good chance I’ll cut another opening in the wall for ductwork, wiring, and pipes to pass through,” Charlie adds. “That will save money for running mechanicals, instead of having two basements isolated from each other.” Another challenge will be building a back deck over some of that basement living space. There, the team will have to lay sleepers over a low-slope membrane roof.

Insulation and windows will be upgraded in the old portion of the house, to match the new construction spaces. The existing 1980s boiler is big enough to handle the new loads of the additions, says TOH plumbing and heating expert Richard Trethewey, but probably will be replaced: “The boiler is thirty-five years old, so chances are that if you tried to reuse it, it would leak right after you left the job.”

The existing hydronic heat is a mix of fin-tube and cast-iron baseboards. The latter will be reinstalled in the old portion of the house; the new living room, which is lined with windows and has scant wall space for radiators, may get in-floor radiant heat. The Cape will be air-conditioned for the first time; finding room for the ductwork, as in any old house, will be a puzzle, says Richard.

“We’re eager to get our hands dirty. We’ll do pretty much anything on the project the crew will let us do.” —Megan Pasquina, homeownerWalls are coming down in the existing house as space is redistributed. But demoed materials won’t go to waste: Kitchen cabinets, countertops, and appliances, as well as sliding doors and wood flooring, will be salvaged and donated to greenGoat, a nonprofit that works with contractors and homeowners to put gently used building materials to work in other projects, and donates large appliances to families in need.

The land that the Pasquinas cherish will be getting plenty of TLC, too. Vegetable and herb gardens will be created outside the front door, native plantings added, and a fire pit built.

For their parts, Megan and Lincoln are itching to pitch in once work begins. “I love this stuff,” says Megan, who’s eager to try her hand at using a nail gun. “And Lincoln has always been handy. I think it will be really fun for us to be involved.”

Did you miss our previous article…
https://www.healthyhomewisconsin.com/?p=530